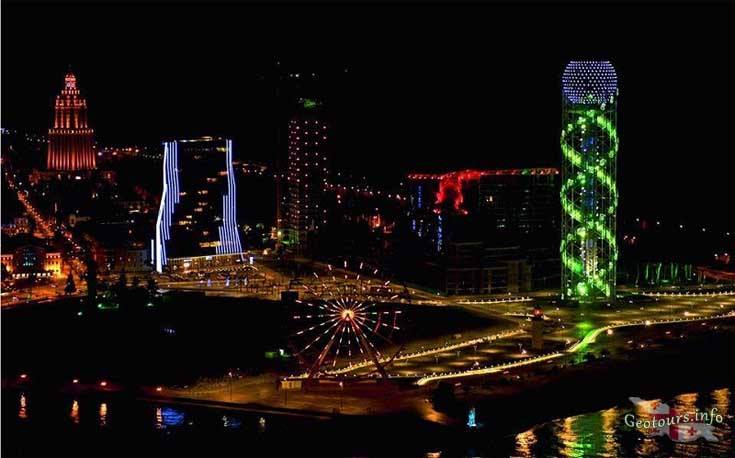 Batumi – the capital of Adjara. Lives in this resort zone to 120 000 people (10 times less than Tbilisi). It is the warm, hospitable and interesting city. For very short time of Batumi became the third largest city of Transcaucasia. Batumi is famous for the beautiful, big boulevard and a unique Botanical garden.

The tremendous paradise botanical garden, is located in 9 kilometers to the North from Batumi in the neighborhood of the resort Cape Verde. The Batumi botanical garden was founded in 1912 and annually receives thousands of vacationers and guests.

It really the Garden of Edem in which samples of the most rare, exotic and beautiful plants from different corners of the planet are collected! In the huge territory of a garden (over 110 hectares) get on nearby with each other: Japanese Oriental cherry, Canary date palm tree, cactuses, bamboos, palm trees, magnolias and cypresses. Except trees in a garden subtropical bushes and plants are widely presented. In total in a garden over five thousand plants of the most different types and forms.

And now it is a little about the boulevard.

The boulevard – the popular vacation spot and walks. From here the best views of the sea.

The old part of the boulevard lasts on 1500 meters, and all length with modern sites reaches 5000 meters. At an entrance it has width about 300 meters (without beach), and is gradually narrowed. The boulevard is set with palm trees, fir-tree trees, and even a bamboo. In places there live popugaychik in cages, ducks and a heron.

Seaside Boulevard is a place where it is possible to understand than the people, the real soul of the city live and breathe. The boulevard is similar to the embankment on the Azure coast: palm trees, well-groomed lawns, fаntan, various sculptures. You at any time can rent the bicycle.

Near the boulevard the city beach lies. Beaches in Batumi and vicinities pebble, without sand. To the East from a beach theaters, cinema, restaurants and cafe with magnificent ethnic cuisine and a set of entertaining institutions are placed. Residential quarters of Batumi look very beautifully, these are the building rainbows painted all colors. Also Old part of the city, the majority home by which it is constructed in the XIX century is especially interesting.

Here the spirit of last centuries reigns, ranks located benches of the handicraftsmen-handicraftsmen making copper ware, magnificent aroma of svezhesvarenny coffee in small cafes excites. The old city differs in a variety of an architectural delicacy: buildings are decorated with chimeras, mermaids, Atlases and other mythical beings.

In respect of cafes and fast food of Batumi enters into the three of the most tasty cities of Georgia (in the company with Tbilisi and Kutaisi). Here is both hachapurny, and usual sasadit, and a khinkali and kharcho and a lobio. In Batumi very tasty do Adzharian khachapuris.

Feature of Batumi – the Turkish edaln and even “teahouses”. Especially there are a lot of them around a mosque.