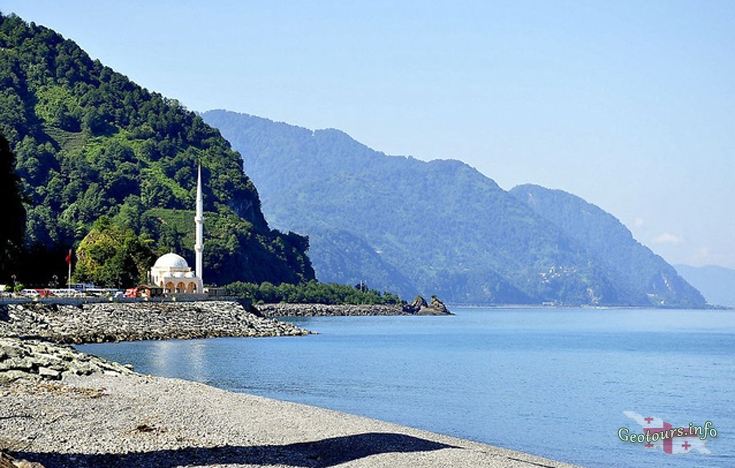 Sarp, Kvariati and Gonio visits a huge number of tourists now. Those who are perfectly familiar with these regions, in summer months enjoy delights of these environmentally friendly places.

Except the clean sea and hillsides, tourists and vacationers the Eucalyptus grove located along the road and endowing vacationers with curative aroma, bringing benefit for health also attracts.

Gonio’s vacationers are attracted by ruins of ancient fortress under the name “Gonio”.

The first mention of fortress belongs to Pliny Jr. (the I century AD). In the II century of our era it was well strengthened Roman city in Colchis (Colchis – the Western Georgia, Iveriya – East Georgia). Later I fell under influence of Byzantium. The name “Gonio” is for the first time mentioned in the message of the trapezundsky historian Mikhail Panaret in the 14th century. Some time was a place of the Genoa trade there. In 1547, against the will, Gonio became part of the Ottoman empire, it proceeded till 1878 when San Stephano’s postcontracts, besides against the will, Adjara became part of other empire – Russian.

The city was also known for the theater and a hippodrome. Besides, the tomb of the Apostle Matvei, one of twelve apostles allegedly can be in Gonio’s fortress. Now it is forbidden to carry out excavation near a grave. Other archeological excavations are carried out to fortresses, paying special attention to the Roman times.

Recently, Gonio also vacationers from other countries began to visit. Having visited here once, tourists and vacationers try and to arrive the next year once again and to bring with themselves new vacationers. Thus, during a summer season deficiency of places is already felt. We advise to consider it and beforehand to take care of hotel and transport that rest poluchit pleasant and useful.