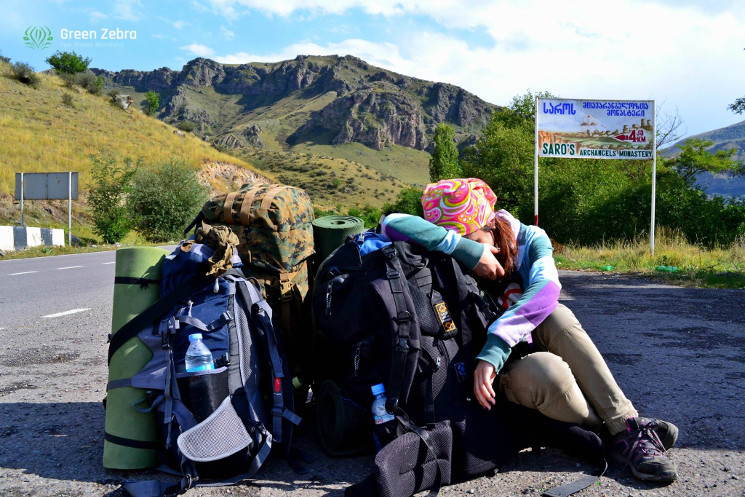 Hitchhiking in Georgia is super easy and safe but also strange and full of adventures. You will catch a car very easily and very fast. Georgian citizens are very friendly and sometimes they invite travelers at home for a dinner or accommodation. It’s also safe to hitchhike in Georgia, there are no thief and killers at all (or it’s very rare). There is only one Highway from Tbilisi to Gori. But it’s not a problem to hitchhike directly on highway unlike European countries. Some of the roads are very dirty and some of them are extremely dangerous. But most of them, generally between cities, they are in pretty good condition. Drivers are crazy, generally they don’t follow the international rules, they build their own rules. They don’t recognize lanes and speed limits. But don’t worry, it’s their job to drive crazy but safe.

It’s very easy to find spots for hitchhiking. Georgian drivers don’t have a problem to stop even on the highway. But it’s better to find some place where they are driving below 80km/h speed.

Sometimes you will see very old cars (made in 1978 or earlier), don’t worry, they can drive even the stones. Also there are many right hand drive or modified cars. For instance, they use natural gas instead of petrol, or they have moved wheel from right to left and etc. But don’t worry, it’s normal and safe (in general).

There are also some disadvantages of hitchhiking in Georgia. It’s not easy to hitchhike for guys, especially if they have long beard or look like a drunk man. It’s always better to hitchhike with girl. Also there are some places (Tusheti, Khevsureti, Gergeti and etc…) where not many locals are driving a car, but is full of tourists. In this places people expect money from travelers, because they think, tourists are source of money.