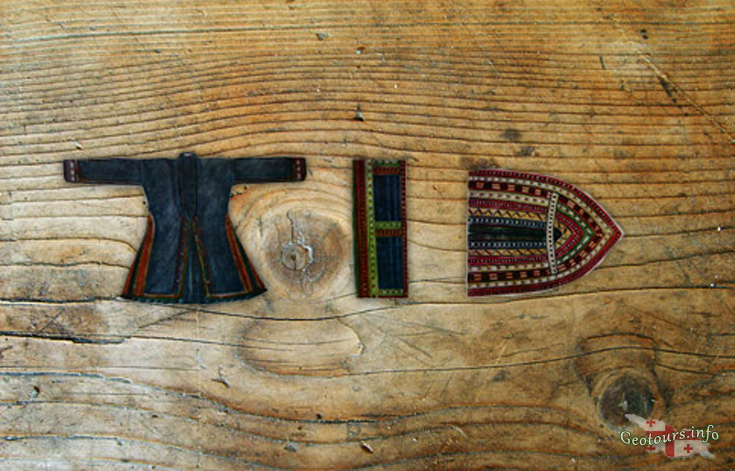 Adzharians from generation to generation follow and adhere to the traditions. Their clothes quite modest, beautiful and rational.

Men – Adzharians wore unusual suits these are shirts (peranga) and wide trousers (dzigv) which were sewed from a homespun woolen matter or sateen of black color. Breed of trousers was very practical and convenient. They were folded, spacious above, were narrowed from top to bottom and at all didn’t disturb at the movement.

The outerwear, i.e. perang Adzharians call zubun which also refueled in trousers. There were zubun winter, warmed, on a wadded lining and with sleeves summer elegies — like a vest from black sateen.

The most expensive, national clothes – the Czech or a chakur. It is cloth clothes, like the Circassian, but with sleeves to an elbow and a high collar. Chokhu подпоясывалиь a special wide color belt with laces or a leather belt. The head was covered by kabalakh (башлык) from thin wool. And, of course, the dress had no washed away without dagger in a sheath, the gun and the cartridge belt.

Also the women’s suit is unusually beautiful. It I was perang (a long shirt to ankles) blue or red color, a sharvala (wide trousers) – wide above and narrow at the ankles sewed from a scarlet chintz. Over a peranga it was put on зубун parag (an oar long dress) from an orange chintz. The suit supplemented peshtemal (a woolen apron). Seasonally the hirkh (outerwear) it was sewed with a wadded lining or it is simple from a chintz.

Adzhars carried a headdress which is called lechak (a print scarf) which one corner was rejected on a back. Over a lechaka covered with a scarf to close the most part of the person. Still Adzharian women covered a face with a thin scarf of a pech, the white veil which girls wore from 12-year age was atop put on.

From footwear standing – leather chusta and nanil (footwear without back), on a wooden sole.

In the first third of the XX century the clothes of an urban style gradually got. Over time Adzharians ceased to wear national clothes everyday. By 30th years in a men’s suit of Adzharians only kabalakh and a pachula, and the traditional chakura rather expensive in production remained, began to be used as smart clothes.

From a suit of women’s clothing the veil and pistan – a long knitted jacket though in a suit of Adzhars I kept traditional character – brightness of paints more long, the belt of a sartkela and a scarf covering the lower part of the person disappear.